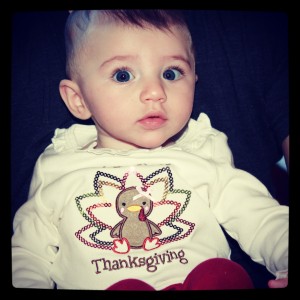 It seems as though Wonder Week 19 has passed!!  This week, there was a significant improvement in Olivia’s mood, sleep and eating.  She’s way less fussy – it’s like she’s back to being her fun, silly, smiley self – and she’s eating 4 to 5 oz per feeding.  I’ll get to the sleep in a moment.

O is pushing herself all the way up on her arms, and loves to grab everything.  She even grabbed at the bottle as hubby was about to feed her, put both hands on it, and fed herself 5 oz one day!!  She loves bubbles, the sound a zipper makes, buzzing and when I blow on her face.  She has shown a lot of interest in sticking her fingers in our mouths, grabbing my nose, and the food off of our plates.  Actually, we started questioning whether she’s ready for solids, since she will grab at our food and smack her lips as though she’s hungry.  So, of course I went searching for a checklist for how to tell if baby is ready for solids.  I found this

link especially helpful. Our pediatrician recommended waiting until 6 months, and starting with Gerber puffs. I think she 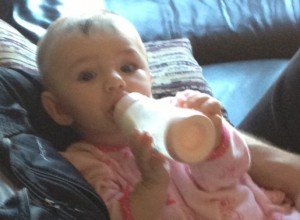 ‘ll be ready before 6 months, but she’s not quite there yet.

Her naps are still inconsistent, but her morning nap is getting longer.  During this 6 week (yes, this was quite a doozy) Wonder Week 19 fussy period, she was sleeping no more than 45 minutes 3 times a day.  Now, her first nap of the day is around 90 minutes!!  As far as nighttime sleep goes, when we told him that she was waking almost hourly each night, her pediatrician recommended letting her cry it out.  This got us thinking.  We weren’t necessarily ready for such an extreme measure, but we knew that three things had to change:

1. we had to start putting her to bed awake but drowsy. every night, I would feed her until she was passed out, wait 30 minutes or so until she was in a deep sleep, and put her in her bassinet. this is a huge no-no according to virtually every baby sleep expert. babies need to learn how to self soothe themselves to sleep.

2. we had to stop using the swaddle at night. even though it helped her sleep for longer stretches, she was breaking out of it and rolling onto her stomach.

3. we had to move her from the bassinet in our room to her own room and her crib.

Well, we got to two out of three this week.  I was not emotionally ready for #3.

First, we decided to wean her off of the swaddle cold turkey, since she was sleeping so poorly anyway.  No more swaddling at night, only at nap time.  That took two nights of reeeally bad sleep. On the third night, she woke up an hour after falling asleep (while eating) and we decided to give her 5 minutes before going to do our usual shush and pat.  She was screaming and even spit up quite a bit since she had eaten more than usual.  We changed her and she was pretty inconsolable until I held her and gave her the paci.  I then put her down, she cried for 5 minutes and hubby went up and told her that it was time to go to sleep.  She then cried for 9 minutes and miraculously fell asleep.  She woke up a couple more times and quickly fell asleep.

Then, we put her to sleep awake but drowsy after her usual bedtime routine (we switched the feeding to the front end of the routine, and we now feed her downstairs before we take her up to bedtime).   It worked!!  It’s incredible how quickly babies learn!! I have to say, I feel like we should have done this sooner.  We are now able to put her to bed and actually go back downstairs to hang out for a few hours before bed!