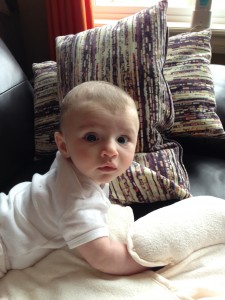 Olivia started majorly scooting this week. I lay her down on her back on the play mat, and within minutes, she’s on her tummy and off the mat. I think that part of her frustration was due to the fact that she couldn’t get where she wanted to go once she was on her tummy. So, I put her on the couch, thinking that the leather surface might be easier to slide on.  She loved it!  First of all, it was a new vantage point, which I’m realizing she really enjoys these days. Second, her arms and feet were able to grip the leather, while her clothing helped her slide on it. She basically “crawled” the length of the couch, stopping along the way to examine her surroundings.

O’s even better at rolling over now, and doesn’t get as frustrated once she’s on her tummy.  She’s still a rolling machine, but she can now hang out on her back or tummy a tad longer before attempting to roll.

She’s also playing with her voice more, and drooling a bit.  She can entertain herself for a while just laying on her tummy and making a yelling/shrieking noise that actually sounds a lot like a cat in heat, hah! 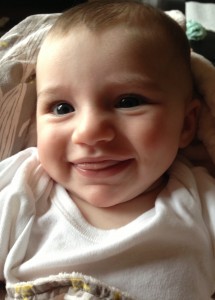 We’ve been going to post-natal yoga since Week 13.  One of my favorite moments this week was doing the Queen’s Pose I loved so much when I was pregnant with Olivia, and now being able to hold her on my chest while she pushed herself up on her arms and smiled and giggled at me.

Last but not least – she fell asleep all on her own in her pack and play bassinet!  Granted, it was about 20 minutes earlier than her scheduled nap time (we’re on the Baby Whisperer’s 3-hour E.A.S.Y. schedule) but she did it all on her own!  I put her on her back in her PnP so she could play in there while I washed some bottles. Of course, she rolled over onto her tummy and grunted for a while as she tried to move around. She paused occasionally to suck on her hands or look at her toys.  I noticed one of those pauses was longer than usual, and when I took a peek, she was zoned out with her eyes open. Five minutes later, she was fast asleep!  Of course, I watched her like a hawk since she had some toys in there and was on her tummy, which is a new sleeping position for her. I don’t think she has realized yet that it’s a much more comfy sleep position than her back, but it’s okay – I’m not going to rush her on that one! 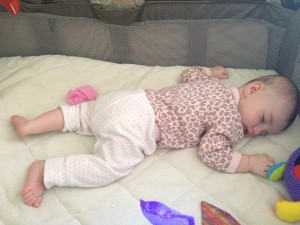 Olivia’s sleep has been fitful over the last few weeks, which the Baby Whisperer connects to over-stimulation and/or mastering a new skill.  We’re also at the very beginning of Wonder Week 19, which begins at about 14.5 weeks and ends at 19.5. It makes sense – when babies are working on physical advances (turning head, rolling over, walking, etc.) their sleep is impacted. We still swaddle her tightly at night time, and since she’s right next to me in the bassinet I can hear when she starts struggling out of it, and hubby and I will re-swaddle and she’ll go back to sleep. Her naps got way shorter as this week went on, so I’m considering extending her awake time by 15 minutes each day until she has transitioned to a 4-hour E.A.S.Y. schedule. Between that and the Daylight Saving time change, things should be pretty interesting!