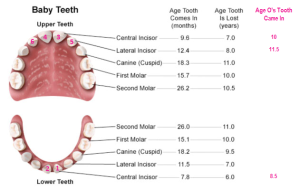 Olivia’s top lateral incisors are breaking through, and the pain was so bad one morning that she was acting totally unlike herself as a result. She woke up crying, with a clear runny nose and alternated between crying and saying (and clinging to) “dada” for a couple of hours. After hubby left for work, she kept pointing at a photo of him and saying “dada”. Of course, since this was her first time acting like this in 11.5 months, we were really nervous that she was sick (especially since she seemed to handle her other teeth without much protest) so I took her to the doctor.  Sure enough, after some ibuprofen and a nap, she was back to her old, rambunctious self.  We’ve tried the frozen teething rings, but the banana toothbrush remains her favorite.  Her first two teeth came in a bit later than average, so it seemed pretty sudden that during the course of a month, the four on the top started to break through all at once!  I’m going to try to stay current with this teething timeline posted on the right. 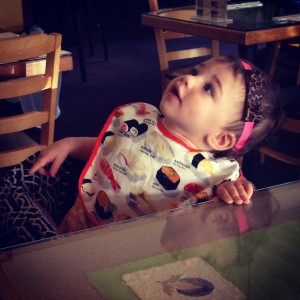 Glued to the screen. Doesn’t she know basketball season is over?!

Is still obsessed with saying “basketball”.  ESPN was on at the sushi place on Saturday and she just kept staring at the TV and repeating the word nonstop.  Yep, she takes after her dad.  So, after we ate, we stopped at Target and got her this Little Tikes Basketball Hoop!!  She’s super excited about the ball (her second favorite word is “ball”) and hubby has already started trying to teach her how to dunk 🙂  The hoop is definitely too high and since it’s not adjustable, there’s very little she can do on her own with it, but it’s still a fun addition to her toy collection.

over in her crib. It was so cute to hear, although of course I wasn’t able to get back to sleep, even after she did!

Skipped her afternoon nap/only napped for 30 minutes a couple of days and then woke up and walked around her crib for a while, waving.

Is such a daddy’s girl! She loves being held by her dad and cries when he puts her down.

Walks over to us, clings to our legs and says “up” when she wants to be picked up.

Is really starting to enjoy sitting in our laps a bit, which is so nice because she hasn’t been super cuddly in the past.

Points to the features on our faces and points to us and says “mama” and “dada”.

Says “hot” and “cold” and is starting to recognize the difference between the two.

Pretends to eat pictures from her books.

Is practicing picking objects up and placing them back where she found them (her hair brush on the night stand, food on a plate, an envelope on the table, etc.).

linked up with Life Lately!